I somehow have the unmistakable talent of being late to the party – of course, this is the proverbial party of good music releases. With all other functions, I’m on time or early. But. This is my first listen to supergroup The Damed Things, featuring Scott Ian (Anthrax), Joe Trohman (Fall Out Boy), Andy Hurley (Fall Out Boy), Rob Caggiano (Anthrax), Josh Newton (Every Time I Die) and Keith Buckley (Every Time I Die). And if that isn’t an all-star lineup, I don’t know what is. 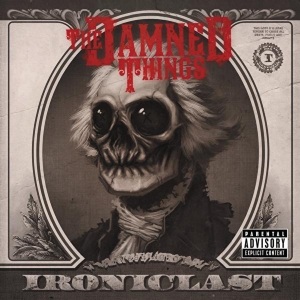 I have to admit, reading over the band members, I expected The Damned Things to have a very different feeling. Buckley’s vocals are quite toned down from what I’m used to with ETID, but I hear Ian’s Anthraxian input with the guitars. I might have not guessed that members of Fall Out Boy would mesh with these other heavy metal dudes, but I’m so wrong. The Damned Things is a new breed.

Being familiar with all of the bands that the members have been in, Handbook for the Recently Deceased shocked me. You can’t just imagine all of the groups meshed together –  no, this is above a band megamix.

Bad Blood twists the knife even harder. Buckley is wonderful in ETID, but his voice is magical in The Damned Things. I really like this combination. Two songs in and I’m kicking myself for being late to this music party.

Hurley holds up the drums, especially in Friday Night (Going Down In Flames). I always enjoyed Fall Out Boy, but this is legit.

We’ve Got A Situation Here is the first song that I heard the Buckley vocals that I’m used to. This group of fellows can really tackle any kind of song they want – but this one sounds fantastic with just a bit more of a heavy edge on it. I kept finding myself turning the volume up little by little.

The Blues Havin Blues is such a magnificent song to finish on. It’s probably the strongest song on the album and it leaves you with a feeling as though you were looking out over the edge of the world with this song echoing it’s remaining notes in the distance. Or maybe this is how Leo felt when he yelled “I’M KING OF THE WORLD!” in Titanic.

I had a really hard time deciding on a favorite, but The Blues Havin Blues has to be it. I think I’ve raved so much about the music, I haven’t touched on the lyrics or the song titles. The lyrics are what you would expect from a band of this caliber – they’re very above the bar and, not necessarily predicable, but probably what you would expect if you know these bands. My favorite line from the last  track goes a little like this: I’ve been blessed with a broken heart since the day I was born. Cleansed in the water, the sons and the daughters, stripped of the sins we’re destined for. See what I mean? Go listen to this album.