I used to love Alternative Press magazine. I would freak out every time I got the newest issue. Without a doubt, my favorite issues were the 100 Bands To Keep Your Eye On issues. I found a ton of bands through those magazines. Call the Cops is one of those bands – but I have no idea how long I’ve had this album lying around. 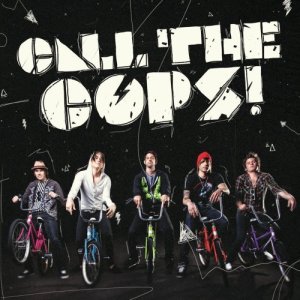 Like it Like That tells me what kind of band this is right off the bat – no questions asked. They’re a pop-punk band with an affinity for catchy lyrics and keyboards. Catchy lyrics as in dance party by yourself at 2 a.m. catchy. Catchy lyrics as in performing a concert to thousands in your car as you’re driving to school/work in the mornings.

If I had known of So Over You previously, I would’ve included it on a Breakup Mix for some friends that I’ve made them for. This should be the song everyone turns to when a breakup happens – I’m so-o-o-o over you, I know-o-o-ow there’s nothing you can do, so do-o-on’t dry your eyes, I hope you drown in all the lies you’ve been tellin’. See what I mean?

Get Up or Get Down is so catchy and infectious that I was already singing along before the song was even through. Have I mentioned how much I really, really love a good pop-punk song?

Room 410 was the first song by Call the Cops that I ever heard. After listening to the album, I remember hearing it on a social networking site. I’m pretty sure I had this on repeat. This rivals Get Up or Get Down for best track on the album. It’s just such a strong pop-punk jam, I can never deal with it. If you’re looking for a new jam – get at this song.

I Knew It Wasn’t Love (Girls) is a newer sound than the rest of the tracks on the album. It’s a bit grimier, with a bit more hostile lyrics than the majority of the songs. When the chorus hits, it starts going like a rave party when the glow sticks hit the scene. And I think some member is attempting to rap near the end of the song. This probably shouldn’t happen – I think certain members of bands like Good Charlotte have shown us that much.

Crash leaves me with a minty taste in my mouth as I come away from the album. It’s a more upbeat, less electronic feeling end to the album. I was looking the band up as I was writing/listening and their Facebook account tells me that their new album is written and they’re going to record it soon, if they haven’t already started. This excites me.