I’ve been a fan of Rihanna for a while now. For the longest time, I was completely obsessed with Umbrella – and every single cover of it I could get my hands on – and believe me, there was a decent number I found. When I started reading reviews of her new album, I was a little skeptical because of a few things people were mentioning. I figured I’d say screw that (a la Leslie Knope) and take a listen for myself 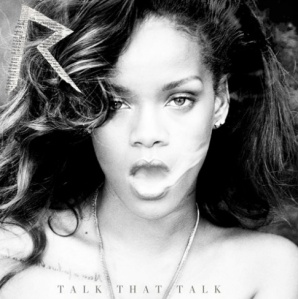 You Da One is a playful track that makes you dance – and you’ll probably be smiling during the time of it. It reminds me of some of Riri’s earlier music in the best way.

Where Have You Been is a little too electronic for my taste. I don’t know how I feel about the direction Rihanna is going with this super-techno vibe. The single she has on the airwaves right now, We Found Love, is only tolerable in small amounts in the car with the windows down. Otherwise, I don’t care for it.

Talk That Talk is a solid, grade-A track. Jay Z always makes a song golden, but when he’s on a track with Rihanna, it gets real. His on-spot rap is a lead-in to strong vocals from Rihanna – and none of that electronic nonsense is present on this track.

Despite some questionable lyrics (I love it when you eat it), I laughed out loud when the chorus first came on in Cockiness. What a hilariously clever play on words. You’re going to have to go listen to this one for yourself. Nothing I could say would do this justice. Trust me.

Drunk on Love will probably end up being my favorite track on the album. It’s got a dance vibe, but there are enough of Rihanna’s vocals to hold the song up and not make it a bust.

Farewell is a really  nice end to the record because it showcases Rihanna’s voice instead of some insane beats that I couldn’t keep up with if I tried. It’s nice to hear a beautiful, slowed down song.

I was a bit nervous before I listened to this album myself, but it’s a pretty solid one and a few of the tracks will probably go into my car-concert rotations.
Key Tracks:
Drunk On Love (track 8)
Talk That Talk (track 4)
Farewell (track 11)

2 thoughts on “Rihanna: Talk that Talk”