Sometimes I like to go on Amazon’s website and type in one of my favorite bands and see the related artists that scroll near the middle of the page. This investigative method was how I discovered the band that we’re listening to today. I can’t remember what album I was viewing, but I know I searched “Bauhaus” in the Amazon search bar. One of the related bands was Sisters of Mercy and I’ve only listened to one of their albums (Floodland). I have two other albums sitting around feeling neglected, so Vision Thing is getting some attention tonight. 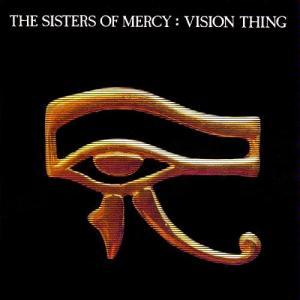 I could tell from first impressions that Amazon was correct in comparing Bauhaus and Sisters of Mercy. If you’ve heard either band, you know the droning gothic rock feel that is consistent in each band. The title track kicks this album off with a good mid-tempo feel. A song like this is one I would recommend to someone who had never heard the band – not quite as dark, but definitely a good definition of what the band is.

Andrew Eldritch’s vocals sound very similar to Peter Murphy’s vocals (he’s the lead singer of Bauhuas) in Ribbons. This song is deeper than the first, with a bit more rage and emotion. There’s a constant scratching beat in the background courtesy of some drums and some guitar. There’s also an addition of what sounds like bells or chimes that keep things interesting.

Though this record was made in 1990, Doctor Jeep sounds like it could be a track from the 80s. You could almost do a Carlton (from Fresh Prince) dance to this upbeat number.

I Was Wrong wraps up this album with slower guitars and a different dynamic than the past two songs. This song is much less what I think about when I hear the term “goth rock” and sounds more like a generalized genre – maybe the wide scope of alternative rock would better suit this track.

This album is a really interesting listen. Though I don’t like it as well as I do Floodlands, this is still a solid churn out from a band who has a harder time keeping a stable line-up than a lot of bands in history. Put this on the next time you’re painting or crafting or doing whatever creative things you like to do. It’ll do you good.