I’m in the process of putting together an archive page for the ole blog and I realized there are a few letters of the alphabet that I’ve neglected. One of those letters is “K,” so I figured I’d try to fill that one in tonight. I was glancing through my K’s and I realized I was severely lacking on this letter, but I did realize I never listened to Kenny Chesney’s newest album. And I haven’t done a country album in a while, so we’re hitting two birds with one blog post! We’re gonna listen to Hemingway’s Whiskey. 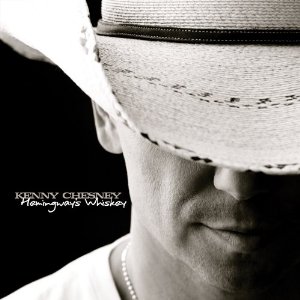 The Boys of Fall kicks things off in true Kenny Chesney fashion – slow, beautiful, crooning, about things from the past. You know the drill. Don’t get me wrong – I love Kenny Chesney and will never turn down one of his tracks. He just gets a little predictable at times.

The next two songs pass in a blur until we reach You and Tequila, featuring Grace Porter. This is a slowed down duet with a great melody. I’m not entirely sure who Grace Porter is, but her voice mixes well with Kenny’s in this smooth country track.

Seven Days comes in with a twang of sadness but slow and graceful lyrics. This is the first song that has grabbed me lyrically. I felt like I was hearing a story.

George Jones jumps onto the hilarious Small Yall. This song has the comedy that is reminiscent of a good Brad Paisley track – or even an old Kenny Chesney song about tractors. Yall know which one I’m talking about.

Some songs hit you because of some event that you can relate to. This seems to happen to me in country songs (see Miranda Lambert’s House That Bult Me) and Where I Grew Up seemed to have the same kind of reaction in my being. Some tears came out, I’m not going to lie. Man, Kenny Chesney, that’s deep.

Round and Round doesn’t sound like the stereotypical country song – this song actually has more of a rock and roll, almost Bon Jovi, vibe  to it. (And now I want Kenny to do a song with Bon Jovi)

I’m pretty impressed because the second half of this album has turned around. Somewhere With You is a mystical sounding song on the same wavelength as Round and Round – more of a rock song than a traditional country song. This song also has a good rhythm with the vocals.

I’m pretty surprised that this album was this good. Kenny’s cranked out some good ones before, and this album is no different. It’s a bit slow to get started, but winds up with some great tracks that are memorable and worthy of being played more than once. The great thing about Kenny is his accessibility. You don’t have to be a hardcore country fan to enjoy his tunes – you don’t even have to consider yourself a country fan. He’s on the line that makes it okay to admit to listening to him. At least give Round and Round or Somewhere With You a try if you’re a nonbeliever.

Key Tracks:
Round and Round (track 9)
Somewhere With You (track 10)
Seven Days (track 5)