Chevelle: Hats Off to the Bull

During my musical exploration period as a preteen, I thought I was an absolute rebel if I listened to bands like Cold (anyone remember them? Or the song Stupid Girl?), Good Charlotte and Slipknot. We won’t even discuss how highly I thought of myself once I started listening to Marilyn Manson. But I’ve noticed that many of those bands that I listened to around that age have made a come-around. I won’t say come-back because I don’t like that term. Example: Korn released an album not long ago. I also recently discovered that Chevelle had a new one out. They were one of the bands that I dabbled in during that period and I thought it would be interesting to see how their newest album is – so we’re going to make Hats Off to the Bull tonight’s album. 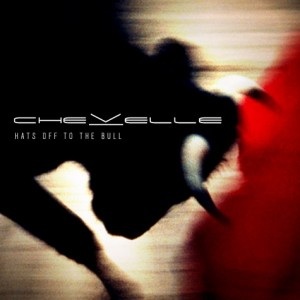 The first track, Face to the Floor, I’ve heard on the radio and liked how it sounded. It’s a pretty straight forward rock track with some good hooks going on – perfect for a radio track. The lyrics are solid enough to sing along to and the drums kill it during the entire song.

I like Same Old Trip even better – it’s a less single-friendly song, so it’s deeper than something like Face to the Floor. The guitar riffs in this track are definitely the stars of the song.

The Meddler almost makes me feel like I’m back in high school listening to Chevelle. This band has remained true to what they really are without all the wacky personality crises that a lot of bands go through. This song is fresh enough to be current, yet familiar enough to be able to still identify with the band. I can’t tell you how many bands I’ve loved that have underwent such radical changes that I cannot even back them anymore.

The slower Envy is one of the strongest tracks on the album – though it’s pretty bare of loud instrumentation, the vocal overlays that they’ve done are really great and this band works very well with songs that feel a bit more sinister and are slowed down to a crawling pace. This song also has the perfect mood for a great climactic moment in a movie – it’s slow and a little creepy, but it feels as though the sun is peaking through the darkened tree tops when it gets to the chorus.

Revenge may be my favorite track on the album in terms of some all around good rock music. This track is all rock and nothing more (or less).

The album wraps up with Clones, a jam that has some pretty great guitar playing happening, even a great solo near the middle. Instead of slowing it down for their outro, Chevelle chose to keep the rock vibe going in this track that ends their album. The chorus is the strongest lyrically on the album to remember and sing along to. You’re just a clone of them, have you no way to set fire? You’re just a clone of them, the devil’s in the ways we live.

Hats off the The Bull gets a hats off from me. While not my favorite rock album in the history of the universe, it is a pretty fun listen. If you even remotely liked the band before, I say go ahead and have a listen to this one when you have some downtime or when you’re surfing the internet. It’s a fun forty-two minutes of some decent rock tunes. And if you’ve never really paid attention to the band – get at this. You never know what you may end up loving.