Jason Isbell and the 400 Unit: Here We Rest

I’m always open to music recommendations, even if I’m going to be a little leery of the band/artist or the person recommending it . But there are a few people in this world who I trust whole-heartedly and don’t even think twice about taking their recommendations with no questions asked. One of those people just saw Ryan Adams a couple weeks ago and sent me a text message raving about the opening act. She subsequently sent me some of the songs in my Spotify inbox and after the first song, I was hooked. Ladies and gentleman, we’re going to take a  listen to Jason Isbell and the 400 Unit. 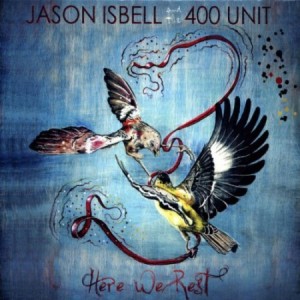 The opening track on this album, Alabama Pines, is a slow song, but not slow moving. The vocals are creamy and velvety and there is little more than guitar and drums in this track, melding together so perfectly.

Go It Alone follows and has slightly more of a rock influence. I’m reminded of the Eagles when this track starts. It’s very slow, smooth rock music if it even fits under that genre. The vocals are slightly scruffy with a soft edge and works well with both the acoustic and the electric guitars that intertwine in this track.

The first song I heard from this band was Codeine and it blew me away. This song is mostly stringed instruments with some very light drums and the melody in the chorus is addicting. The lyrics are catchy and leave you wishing you knew them already so you could sing along.

Guitars are definitely the star music instrument of this album and that is made very apparent in the acoustic Daisy Mae. Isbell’s vocals perfectly echo the tone of the acoustic guitar. You can put on this track and sit back to enjoy a glass of wine or a cold beer and unravel from the day.

Stepping it back up into upbeat territory, Never Could Believe comes in with some piano seriously rocking the song. This track feels like the motions of a live wire and it makes you want to sway to the beat.

Save it for Sunday is one of the most beautiful tracks on the album. It’s a slow arrangement of instruments that just folds around you and tucks you into a slow groove.

The album wraps up with Tour of Duty, an upbeat end to the album, telling the story of a soldier coming home and trying to live like a civilian. I’ve noticed it on other tracks, but we’ll discuss it here – above being a vocalist or a musician, Jason Isbell is an incredible story teller. Instead of the lyrics just being like a backdrop to a photograph, these songs are full of rich words that paint a picture of the song right in front of you. Several of these songs have completely come to life in front of my eyes. It’s things like this that makes a song special.

This album is somewhere in between a light country and a rock on the genre scale. Jason Isbell and the 400 Unit is something that I could see a wide audience listening to, too, which is rare. This is just straightforward great musicianship with a twist. Each song opening is unique in a way that it grabs you and holds you throughout the song as the story is breathed to life. Check this out –  you will not be disappointed, I’m sure of it.